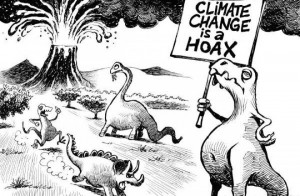 What climate change is and what it is not.

An important thing students need to know is the difference between climate and weather. Climate is seasonal and regional and weather is daily and local. Just because we have a big snow storm does not mean that climate change is not happening. Scientists look at trends over long periods to document regional and worldwide changes in climate.

In 1816, Indonesia’s Mount Tambora exploded in a massive ash and gas cloud, destroying the city of Tambora and killing about 92000 people. The ash and sulphuric acid cloud was so great it blocked the sun and cooled the Earth’s Northern Hemisphere by 3 degrees. That year, the explosion resulted in summer frosts in North American and widespread crop failures as well as outbreaks of diseases and famines in Europe and Britain (Williams, 2016). In 1816, another eruption caused the Earth to cool 2 degrees due to Mount Krakatau’s volcanic eruption.

Further, we need to know that global warming is caused by the release of carbon dioxide into our atmosphere. Global climate change is the result of this burning of carbon creating a warming greenhouse effect on the Earth’s atmosphere.

What’s up with the importance of climate change?

When humans face serious hazards like terrorism, flu outbreaks, global market crashes, and the result of large exploding volcanoes, we deal with their short term impacts. These impacts do not have the chance of “ravaging the natural world and collapsing civilization” (Gardner, 2018) like the permanent changes that can happen to global climates. Most people understand and accept that global warming is happening, but they are not immediately and directly impacted by the change in climates as these changes come in increments. Global climate change is not an imminent threat … yet.

We know that smoking causes cancer but people still smoke (Gardener, 2018). We know that consuming alcohol causes health and social problems but we still consume it (Bishop-Stall, 2018). Humans still build houses in flood plains and are surprised when their houses are periodically flooded – as a Red Cross volunteer, people showed me the flood lines in their basements over a 100 year period but were again surprised at the level of flooding in Calgary in 2013.

It is our human psychology that keeps us distant from the abstract impending consequences. Climate change is complex and abstract and we need to trust scientists to help us understand its impact on the long term of human well being.

Humans have stopped global impacts due to human activities.

In the 1980’s, governments met to put policies in place to limit ozone depletion and acid rain by managing the release of ozone depleting and acid rain causing chemicals into our global atmosphere. This is proof that when humans work together, we can affect change.

At home, I have lost 6 trees due to invasive beetles. I have a 3 year old snow blower that has only been used once. As a former geologist, I know that it took millions and millions and millions of years to capture all the carbon we are now releasing into our environment over 300 years up until today – that’s got to have an impact on our global climate.

People cannot feel the threats measured in atmospheric concentrations of carbon dioxide but we can listen to the stories of others who have been directly impacted by the result of global warming. By making and following policies to limit gases that result in global warming and climate change, we can limit the imminent change in our global climate.

Below are some excellent teacher and student resources.

Climate Change (according to a kid) Video (all grades)

Bishop-Stall, S. (December 30, 2018) Drink. Hungover. Repeat. Why do we keep doing this to ourselves? The Globe and Mail. Downloaded from https://www.theglobeandmail.com/opinion/article-drink-hungover-repeat-why-do-we-keep-doing-this-to-ourselves/

Gardner, D. (December 22, 2018). Why don’t we care about climate change. The Globe and Mail. Downloaded from https://www.theglobeandmail.com/opinion/article-why-dont-we-care-about-climate-change/

Williams, J. (June 10, 2016). The epic volcano eruption that led to the “Year Without a Summer”, The Washington Post, Downloaded from https://www.washingtonpost.com/news/capital-weather-gang/wp/2015/04/24/the-epic-volcano-eruption-that-led-to-the-year-without-a-summer/?noredirect=on&utm_term=.1908892a962e