Once in a while, a book comes out that gets you so excited that you practically knock over your students with your animated read aloud to your class.

This is how I feel about the book released in 2020 called “Fauja Singh Keeps Going” by Simran Jeet Singh. 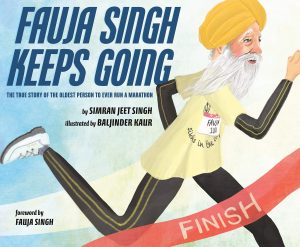 I LOVE THIS BOOK!!

I understand that my initial enthusiasm for this book is clearly connected to my love of running and obsession with one day being able to complete a full marathon, however this book is so much more. It has so many excellent themes and lessons to examine that this book will be a staple in my future programming for many years to come.

For those of you that are unfamiliar with the story, Fauja Singh is the oldest person to complete a marathon. At the age of 100 (yes, you read that correctly) he competed in and completed the Toronto Waterfront Marathon in a time of 8 hours, 11 minutes and 5.9 seconds. Unbelievable! But that is only one part of a truly phenomenal story that is captured so well in this book.

This book shares his entire life’s journey and begins with an incredible forward written by Mr. Singh himself about overcoming obstacles. There are so many themes that could be explored while reading this book. Below are just a few:

Perservance/benefits of hard work: Fauja Singh was unable to walk as a young child. He did not take his first step until after his fifth birthday. He was home-schooled for much of his elementary years because he could not walk to school. But he never gave up and committed himself to learning to walk. Hard work allowed him to set numerous records and take pride in becoming a world class runner. Every day he just put one foot in front of the other.

Be open to trying new things at any age: At 81, Mr. Singh got on a plane for the very first time and moved to England so he could be closer to family. While there, trying to find something to do to pass the time, he saw some people running on TV and decided to give it a try. It is a good reminder to all of us that we should be open to trying new things and not to be afraid of new opportunities in life.

The impact of racist words: One of the first times Fauja Singh doubted his ability to run was when he was verbally attacked by spectators at the New York City Marathon. The racist words and phrases that were shouted at him at the start line really impacted Mr. Singh and he ran his slowest race that day. He began to ask himself “Maybe this is too hard. Maybe you are too weak.”

Overcoming limitations set by others: Throughout Fauja Singh’s life people told him he couldn’t do things. However, his strong sense of self helped him overcome the limits that other people thought he should have.

Self care of ones mind, body and soul: Mr. Singh focuses on care of his body, mind and soul. This is what ultimately helps him to do what many people believed would be impossible.

On the very last page of the book is a list of Fauja Singh’s records. The records are extensive and amazing! However, there is a very important statement that is shared on this page that would be the perfect impetus for an inquiry assignment. The book states “While many running organizations have recognized his records, the Guinness Book of World Records has yet to officially honor Fauja Singh as the world’s oldest marathoner. Guinness does not accept Fauja Singh’s government documents and requires a birth certificate-even though India did not begin registering births until 1969, 58 years after Fauja Singh’s birth.” This statement could really be at the center of a class study on structures that exist in organizations that are exclusionary and limiting.  It could also be an excellent tool to explore what can you do about a structure that you don’t agree with. The possibilities are endless.

Overall, a really fantastic book that could be used to inspire students of all ages.