I grew up in a very musical household. My family is from the Maritimes where the kitchen party originated. I always had visitors stopping by and music blaring in our house. There were guitars, keyboards, banjos or the spoons being played by anyone who could cram into our home. My parents used to listen to old country while they vacuumed early on Saturday morning singing and dancing. As a teenager, I did not find this amusing, but as a music teacher I know the power of music to bring people together as a community.

The sharing of music can take many forms from evening concerts to performances in assemblies. However, this year I decided to add in a few performances that were much less formal with the goal of letting the music be the catalyst for having some fun (very much like the Maritimes).

I started a recorder consort and ukulele club this year. (A recorder consort is a variety of recorders playing together such as an alto, soprano, tenor and bass) Usually, on the first day of a new club the students’ first question is always about when they will be performing. Both of these clubs were no exception. I told the students that we were going to be going “on tour” with our instruments.

Once both clubs had learned a song or two on their new instruments off we went. During our nutrition break time, we took our instruments and found classes that were willing to sing along, tap along or groove along with our music. We went to 2 or 3 classes per break and had a great time.

All this week as I walked down the halls, students from the classes we performed in have been waving their hands and saying hi to me and the students in the club. In our big school, it is not very often that the grade five students do something with the grade two students or the grade fours with the grade ones. The older students may have brought the instruments but just like in a kitchen party everyone was a participating member of the group. Whether you bring your voice, your stomping foot or your clapping hands the music you create together is what brings you together. 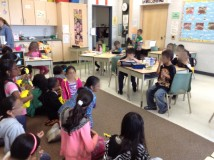