If you are like me, you have been watching every Blue Jay game with excitement as they get closer and closer to becoming the AL East Champions. I decided instead of fighting the desire to spend every waking minute talking about them, I would incorporate this excitement into my music program for September and early October.

I started off by introducing my favourite player’s names and practiced saying the names to a steady beat. I chose different names according to the curriculum expectations for that grade. For Grade Three and Four classes I chose Tulowitzki, Price, Pillar, Smoak, Revere and Goins. For Grade Five classes I chose Donaldson, Bautisita, Price, Pillar, and Revere. The initial goal was to get the students to feel the rhythm of those names before they had to label them with standard notation.

In groups, students then chose their 4 favourite players from the list and put them into an order. Their first job was to get everyone in their group to say their players in unison to a steady beat. After they completed that task successfully, they took the player’s names and did it with body percussion. They could clap them, stomp them, snap them as long as they made the rhythm of the names to a steady beat. After that, they took their rhythmic composition and chose an instrument to perform their creation.

Once we labelled their rhythms, each group made a final composition. They could use the names of the players, body percussion or instruments in any order they wanted. They were encouraged to add different dynamics and to use their different members of the group for solos or duos. Some of my groups added Beat Boxing or awesome stomping to get a good beat going. My instructions were to be as creative as they could be.

I learned so many things about my students through this fun project. I learned that very few of my students know anything about baseball as they often compared the positions in baseball to the positions to something they were more familiar with, such as cricket. I also learned how passionate they are about sports. I feel like I have tapped into a whole new hook when I feel their energy is lacking later in the school year.

Next Friday, hopefully when the Blue Jays are getting ready to play their second game in the American League Division Series, I will be holding a kick ball tournament during the day at my school. The gym teacher and I decided to celebrate our students’ music by holding an opening ceremony where each class will share their creations followed by the game they have been learning in gym. I am sure we will probably even take some time to sing “Okay, Okay, Blue Jays, Blue Jays, Let’s Play Ball”. 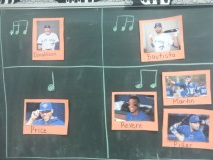