It’s February and another “Snowmaggedon” or ice storm has just passed, is happening now or forecast to be on its way. Not surprisingly, frigid and snowy weather have cost our students a lot of important outdoor time this year. Recently, I knew we’d had too many indoor recesses in a row when a grade 2 student called me daddy. With temperatures below -17°C, our school became a hive of 600+ learners with a lot of energy to burn. Too bad we couldn’t use it to warm the building.

Despite the recent large accumulations of snow, biting sideways winds, and dangerous driving conditions our schools remain open even though busses were cancelled. Props to our caretakers who are on the front lines everyday making our schools safe hours before the first bell. It’s Canada after all, not Texas. We’re equipped for whatever wintry weather gets whipped our way, but it still takes its toll on students, their families, and educators. This got me thinking about all of the factors that are considered in the decision to cancel or not cancel school transport over something so common, yet complex, as a snowstorm in Ontario.

Since the start of Winter in Dec 2017, there have been three occasions where busses have been cancelled in my school board. I can only imagine that the decisions to do so, did not come lightly. From what I’ve pieced together, the simplest way to understand this is to trust there are people whose jobs are to officially figure out and communicate whether it’s too risky for busses to safely pick up students in the morning and then safely return them at the end of the day.

Each school board has developed policies and provisions for a variety of weather related situations. Most seem to operate along the same guidelines, but what becomes fun is how it plays out on Twitter.

On the morning of a storm day, it seems the whole world wakes up early to check news and weather outlets, or the internet for the latest information. Assuredly, a range of emotions are played out as to whether the daily drive is determined to be disrupted. And as fast as you can say social media, a blizzard of micro-agression via micro-blogs covers the digital landscape.

I check Twitter for an official message from my school board first. Typically, any news regarding bus cancellations gets posted around 6:00 a.m. Anything before that is read at your own risk is usually filled with some interesting and short-syllabled reading to start the day. Tweets like these usually come in the form of announcements reminding the board about the snow, pleas to cancel, and not so subtle supplications.

Over the course of about 30 minutes pre- or post-official board announcements most messages shovel some similar emotional paths.

Passive aggressive to dictatorial to dangerous

Perhaps speaking their mind, as if it was truth, would get this person’s suggestions noticed? Crickets for this one.

One of the most daunting tasks for a social media manager at a school board has to be deciding when to engage or keep scrolling. The person who shared this tweet was not finished and proceeded to post a brief, albeit profane, reply that expressed their measure of disappointment. I know this didn’t have anything to do with cancellation of exams because Term 2 has just started. I wonder how bad is this person’s perception of education that they feel compelled to hurl such anger at the school board over a non-snow day?

Not wanting to believe that this sort of thing was limited to my school board, I checked out what was going on in another GTA board like Peel. Not surprisingly, their Twitter feed was piled high with similarly pointed messages from last week’s real snow day. Their approach however, was a bit more interactive as can be seen in this thread of tweets: 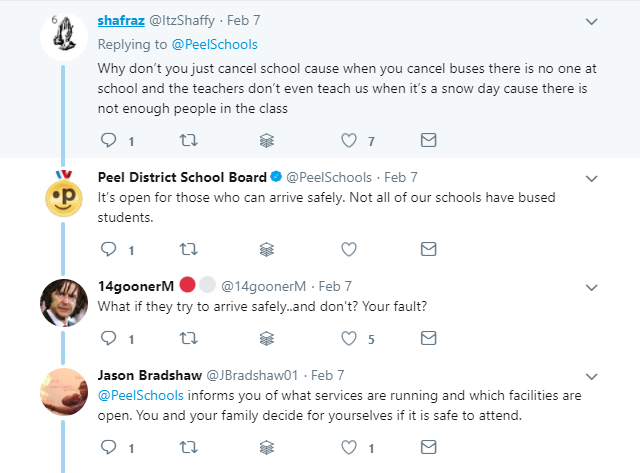 Reading on in this thread, I found supportive messages being shared via the board and one of its teachers. The tone is clear and communicates a desire to inform and engage their clientele. I found this level of interaction informative with only a level of snark by those pleading their cases for a snow day in the Twitterverse.

Look at how the student states that the teachers don’t even teach on snow days. A statement I do not agree with. Nevertheless, this is how it is perceived by that particular student. I am sure that teaching has to be adapted to the numbers on snow days, but that learning is always the option and outcome even when snow is piling up.

Read more in The decisions, part 2.