I am using the literature-based resource kit, Social Justice Begins with Me (ETFO), to introduce various themes to my Kindergarten students regarding social justice. In the first lesson lesson we used the book, The Colors of Us by Karen Katz. It is the story of a little girl that paints a self-portrait and wants to use brown for her skin. Her mother takes her on a walk in their neighbourhood where she learns that there are many different shades of brown.

Before reading the book we compared and discussed the sources of colour used in the book, such as cinnamon, chocolate, and honey. After we read the book, we used red, yellow and black paint to mix and create various shades of brown. The children were engaged in the process as they observed then commented on whether their shade was a light or dark brown. Some children were using the words from the book in their descriptions, such as “It looks like cocoa!”

For the final activity, each child looked at the shades of brown and selected the one they identified with as the colour of their own skin. We made a display of “handprints” for display in our classroom, one for each child. As they picked the shade of their choice, they made comments such as, “My hand looks like honey” or “She is that shade of brown (pointing).”

During the week we spent on these lessons, we were also asked to paint a canvas for one of the Character Traits that our school recognizes throughout the year. The canvases are hung with pride at our school entrance. Our class was given the task of creating a canvas for the trait, Co-operation. The ECE and I thought why not have the children use their selected handprint not only as a symbol of identity and self-esteem in the classroom, but as part of one panel to demonstrate how respect for one another is the first step that leads to co-operating with one another. Our canvas became a culminating activity for lessons we learned about social justice. 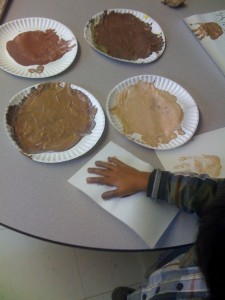