While our transition from summer to school traditionally begins after Labour Day, there are more and more students starting back to class in August than ever before. This is known in edu-circles as a balanced or modified year. It offers quite a few upsides that benefit our learners and with some time for adjustment, for our profession. So I ask…

Imagine if we all started in August with a balanced school year that allowed the learning to be spread out over a longer period of time, but with a few week long breaks built in? What are the pros and cons of such a shift in a historically established calendar? Is it possible to change a 100+ year old practice?

Helping out on the farm

A balanced school year makes sense on a number of levels. Especially, when we consider that the original reason for a September start stemmed from the need for students to be available to work on the family farm. In some areas of the province, farming is still a factor, but it is very evident, that the majority of the nearly 2 million students from K to 12 live close to or in cities. Most are not feeding a herd, driving a combine, or mending fences in July and August.

However, a greater majority of students are left to swelter in concrete jungles trying to stay cool. There are few if any universally accessible programs that do not require a computer bot like skill in order to register on-line for limited spaces. So no swimming lessons, city camps, or classes for all. In fact, the City of Toronto announced that it will try to add 70 000 new program spaces just to accomodate current demand.

Which means, for the foreseeable future, most students will still be given a summer sentence stuck indoors. It is no secret, our cities lack adequate child care, recreation, youth programming, and social spaces. What if all school boards were able to offer a balanced school year and provide working families with an option that would ultimately save them money in conjunction with municipalities? A kind of multi-tiered approach to community and education.

With government money used for creating and subsidizing child care spaces, an investment in a balanced school year would relieve, not remove, the pressure by allowing younger school aged children to be in the classroom rather than a daycare centre. This in itself could save families 3 to 4 weeks of childcare costs that could then be spread out over time through the year rather than in one expensive 9 week chunk. Granted, that there are extra weeks off throughout the year, but they are distributed over the school calendar.

The biggest obstacle to all of this is from a purely structural point of view and comes from having to retrofit hundreds, if not thousands of elementary schools with adequate climate controls, aka air conditioning. Recent returns to the classroom remind us all that our elementary schools are woefully equipped to deal with irratic temperature fluctuations and extreme heat. 2 fans per classroom do nothing to cut through the sweltering heat on the first or second floors of any ill-equipped building – even with the lights off.

The bigger question that comes to mind is why our province still chooses to provide air conditioning to students in high school, but not from JK to 8? This type of systemic disparity does not seem fair. Are elementary school students and staff expected to feel they are being treated fairly by the government’s funding model? I can see fingers pointing in all directions here, but not a one is doing a thing to acknowledge or remedy the problem. Students suffering from heat exhaustion do not make good learners. Perhaps it’s time for our grade 5 Social Studies classes to mount a letter writing campaign to ask our government to do its job and serve its future taxpayers. We’d better hurry before that curriculum gets changed.

I feel we are about to see bigger problems in our province if facilities equity cannot be guaranteed in all schools. Think of it like this; the province buys or leases 1000s of vehicles each year. After a few years they are traded in or replaced with newer models and the fleet stays rolling. If Ontario maintained its government auto fleet like its schools, some would have hand crank windows, some might have air-conditioning, some would have low mileage, while others would be up on blocks. Most would need to go to the body shop for repairs and others would have to be towed to the scrapyard. Nobody would want to drive in an unreliable vehicle. So why are our schools being left to deteriorate through underfunding and repair backlogs?

How is it fair to expect standardized results when there are no standard facilities? Is it a class thing? A neighbourhood thing?

As teachers, we take pride in our workspace. We have witnessed all that can be done each year despite the structural shortfalls and disparities from school to school and board to board. We also know that the current funding model for our schools cannot be a band-aid solution. The recent cuts by the new provincial government are leaving school boards with open wounds.

It’s not all bad (well the above part is, but below is all sunshine)

This year’s return to school was ushered in with all of the elation, excitement, and chaos of its predecessors. How could it not be so? At my school over 600 hope-filled students converged on the playground for a surreal moment of truth. Who was going to be their teacher? In which classroom? Main  sauna or luxurious portable? I loved the chaos that was the first day. It was perfect weather for a July day in September. Perhaps in the future you will be reading this message in August. In the meantime, welcome back. 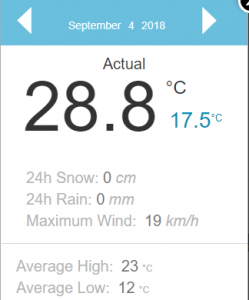 In my next post I’ll discuss the aspects of greater knowledge retention that come from a more balanced school year. What do you think of the idea of the school year spread out over a longer period of time? Please share and comment to continue the conversation. Thank you for reading.

Interesting blog post explaining how education is funded in Ontario.