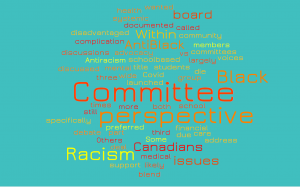 As part of my advocacy for students, I’m on a school-based committee to address systemic equity issues within my school board. These board wide equity issues deal specifically with documented Black racism.

Equity is defined as “justice according to natural law or right specifically : freedom from bias or favoritism” or “the quality of being fair or impartial; fairness; impartiality: something that is fair and just.” The idea of equity does not address the systemic issues that people face. Making all things equal does not compensate for the underlying challenges faced by groups such as oppression and socio-economic factors. Equity does not always invoke the action needed to overcome deeply rooted systemic cultural issues.

Anti-racism “is a form of action against racism and the systemic racism and the oppression of marginalized groups. Being antiracist is based on the conscious efforts and actions to provide equitable opportunities for all people on an individual and systemic level.”

In order for anti-racism action to be effective, all people involved must take a conscious approach to face their own privilege by acting against acts of racial discrimination and changing personal biases.

Over my various careers as a Geologist, Marketing Manager, and now Teacher, I seen many equity committees come and go. Well meaning participants discussed the importance of promoting equity in organizations but in the end, they failed to meet their goals as the initiatives merely scratched the surface. These committees also did not address organizational cultures that support systemic barriers and prevent the implementing of real change.

As a Geologist, over 30 years ago, I faced many systemic walls and gatekeepers that discouraged me from moving forward in my career because I was a woman. I lost track of how many times I was told that I should “just get married and have babies.” My colleagues were mostly White privileged men with wives who did the unpaid work of managing family and home. These men had the privilege of devoting all their time to their work. They rarely faced barriers.

As a Marketing Manager for a Canadian corporation, I was part of an “equity” committee. Here we discussed ways to give more equity to women. During an “Equal Pay for Equal Work” program, my corporation rated my job title to a job title in their warehouse; it probably had more to do with what I was getting paid instead of my level of responsibility. I did not get a raise in pay.

The equity committee discussed surface level approaches to support more equity for women in the workplace. But the managers and directors of the company were all men with White privilege. I felt I was treated equally to men most of the time, until I had children. Having children unearthed the many inequities faced by all working mothers. Besides finding good daycare, I had challenges staying home with my children when they were sick. Their father refused to take time off as it was a “career limiting move.”

I started talking with women parenting while working and suggested creating a support lunch group called “MAW – Mothers At Work.” This was quickly shut down by my supervisor as the gatekeepers were not comfortable with the existence of this group. I knew then that starting a daycare at the corporation was not going to happen!

The most significant memory I have of this time was when a meeting went over time and I told my supervisor that I had to leave to go home and feed my child. I could not get home late; I was breastfeeding at the time and had an hour’s commute to Burlington. My boss told me that if I left the meeting, it would be a “career limiting move.”

The corporations’ gatekeepers pushed for the equity committee, not to promote equity, but to give the impression of promoting equity as they were comfortable in the systemic culture that kept them firmly in place.

I cite the above personal experiences as examples of how untargeted equity work is ineffective in making real change for those who need it. Real change means unearthing barriers to equity. This means that gatekeepers can either change their ways, or be replaced. In order to effect change, this means that people, who identify as racialized, must see people like themselves in leadership roles. Having a token person who identifies as racialized does not cut it.

Parents without their Voice Being Hears

As a teacher, I attended a school board meeting where a group of parents were advocating for special education support for their children. These parents had already asked teachers, principals, superintendents, and school board trustees for support for their children and this was their next step.  Listening to their stories, I wondered why these parents had to go to such lengths to get this support. In order to support these students, resources would need to be found. It became clear to me that the school board did not want to pay for the psychoeducational assessments needed to unearth these students’ specific special education needs. The board probably noted that if these parents got this support, then it would open the flood gates of more board paid psychoeducational assessments. Providing more opportunities for board paid students assessments would be very costly. These students were Black and lived in low social-economic households.

Lack of Resources to Support Students

In my role as a teacher, I’ve witnessed Black students not getting the support they needed to be academically and socially successful. Many reasons exist. Students may be on long waiting lists for psychoeducational assessments that are paid by school boards; note that resourced parents don’t wait for these assessments and pay for them privately. A lack of funding for extra supports, such as social work, could also be an issue in getting students’ support. Additional issues could be that students’ significant socio-economic issues distract from getting to the root of academic challenges. In the end, these students still move from grade to grade without the supports they need, falling further behind.

Here, the heart of Black racism starts with the Transatlantic Slave Trade. As early as the year 1503, the Black Slave Trade devastated African countries, making many Europeans and North Americans very rich. To what is now Canada and the United States, the Slave Trade shipped millions of people, forced into bondage into a lifetime of work in fields, households, and mills. It is estimated up to 12 million Africans were captured and forced into the slave trade as human property. Unfortunately, more that a million people never set foot on North American soil as they died on the journey.

In Upper Canada, now Ontario, a former slave, Peter Martin, brought the mistreatment of Black slaves to the attention of Lieutenant Governor John Graves Simcoe.  Simcoe pushed for the legislation of 1793 Act Against Slavery. The Upper Canada elected executive council members, “who were merchants or farmers who depended on slave labour, saw no need for emancipation”. The Assembly did pass an Act Against Slavery that legislated the gradual abolition of slavery. This meant “no slaves could be imported; slaves already in the province would remain enslaved until death, no new slaves could be brought into Upper Canada, and children born to female slaves would be slaves but must be freed at age 25”. It took until another forty years, in 1833, for Britain to abolish the slavery of Black people.

Enslaving Black Africans and African Americans would not end until after the American Civil War on December 18th, 1862 (only 158 years ago). This resulted in many freed slaves becoming poorly paid sharecroppers and workers. White supremacy movements and Black Codes were launched, a year after, in 1877.

In the 1960s, the Civil Rights movement achieved political and social gains. This would still be not enough as the Black Lives Matter movement would rise in 2013.

A legacy 360 years of social and economic systemic oppression

The 360 years of slavery would leave a legacy of social and economic systemic oppression for all people who identify as Black.

For me, the push for equity for all is not enough. There are documented issues of racism against Black students within school boards in Ontario. It is time to dig deeper into challenging the systemic racist structures within school systems in order to give our students, who identify as Black, a chance to overcome their own barriers to social and academic success. As educators, we must take this difficult task of challenging our own biases towards those who identify as Black. Teachers work to promote the best opportunities for all students’ futures. We have more work to do.

I write this blog as a White woman with economic and educational privilege. I live my life carrying my White Backpack of privilege, never worrying about being carded or being asked to see a receipt when I leave a store. When my students, who identify as Black, complain about police bothering their families, I acknowledge that this happens and we talk about the roots of racism. When my students note that books have “all White kids” in illustrations, we talk about why this is the case and how it should change.

I will work towards Anti Black racism on an Anti-Racism committee as I unpack my White backpack …  as it is a life long task.