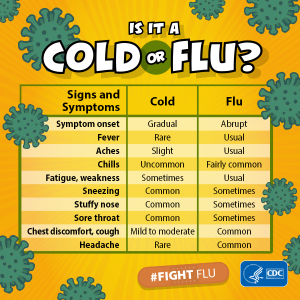 It’s a good question to ask teachers as the nature of their professional exposes them to hundreds of people each working day – this includes children who get sick on a regular basis as they are still in the process of strengthening their immune system. Unlike medical workers, teachers do not work in an environment where surfaces are continually cleaned. Flu is spread by tiny droplets from a sick person coughing, sneezing, or talking. Children openly sneeze and do not always wash their hands. This results in teachers having increased levels of exposure to colds and flu as compared to other professionals.

The Flu: A Guide for Parents

When does flu season start?

Flu season starts in the late fall as the weather changes and people spend more time inside. Starting in October, getting a flu shot is the perfect time to hold off the flu.

What’s the difference between the flu and a cold?

Getting the flu is not like getting a cold. Colds usually come on gradually with symptoms of sneezing, stuffy noses, sore throats, and a mild to moderate cough.

The flu is very different. Getting a flu virus results in an abrupt onset with fever, aches, chills, fatigue, weakness, cough, headache, and overall body discomfort which sometimes includes a sore throat and stuffy nose.

Who is most at risk?

For most people, getting the flu does not cause serious health problems. But in some cases, flu can cause pneumonia, bronchitis, sinus infections, and ear infections. With health conditions such as asthma and heart problems, people can end up in complications resulting in much time off work and/or hospital stays. High risk groups include people with asthma, heart disease, kidney disease, blood disorders, liver disorders, diabetes, cancer, and neurological conditions. The age groups most impacted by the flu include adults older than 65 years, pregnant women, and young children under 2 years old.

Can a flu vaccine give you the flu?

“No, flu vaccines cannot cause flu illness. Flu vaccines given with a needle (i.e., flu shots) are currently made in two ways: the vaccine is made either with a) flu viruses that have been ‘inactivated’ (killed) and that therefore are not infectious, or b) using only a single gene from a flu virus (as opposed to the full virus) in order to produce an immune response without causing infection. This is the case for  recombinant influenza vaccines.” Source: Centers for Disease Control and Prevention, National Center for Immunization and Respiratory Diseases (NCIRD)

Why is it so important to get a flu shot?

What’s so special about this year’s flu season?

One hundred years ago, between 1918 to 1920, a vigilant H1N1 flu (influenza) pandemic spread across the world infecting 500 million people and killing over 50, million people. This resulted in a decrease in the world population by about 3 to 5%. This flu is often referred to as the Spanish Flu but its origins are still debated today. This deadly flu was thought to have spread from soldiers fighting in World War I. This flu was associated with high death rates of healthy young people with some dying within hours of developing symptoms

North American health professionals often look to Australia to predict the next flu season. This year, Australia had an early and severe flu season which could mean a similar outbreak in Canada. In 2017, Australia had their worst flu outbreak in 20 years which was followed by one of the worst outbreaks of flu in the United States with an estimated 79,000 dead.

Flu outbreaks can result in complications with more hospital stays that overtax health systems for people needing hospitalization for other issues. Getting the flu vaccine could prevent this from happening.

In 2009, my students invited their classmates to a birthday party. One of the students had the H1N1 flu virus. In a class of 24 students, 18 students missed a week of class due to this flu. Their teacher, me, was then hit with the flu. I missed 4 days of work. I felt like I had been hit by a truck. Upon hearing I was diagnosed with H1N1, my partner got his flu shot and slept in another room until I was well. The flu compromised my immune system and months later I contracted Whooping Cough.

Stay healthy. Be prepared. Get a flu shot this year.

5 thoughts on “Did you get your flu shot yet?”