Did anyone else go to sleep on the last night of school already thinking about next year? I did.

It’s not the first time either. After 10 years in education, it is now a given that I will go to sleep on the last day of school reflective, happy, and excited about the past, present, and future of this calling.

2 sleeps into the Canada Day long weekend and the reflections continue. Along with my REM time retrospectives (not the band, although they are awesome) come some big looks forward to September. It’s okay if you think this is not normal. I’m good with it. It’s not above, but it is definitely beyond what I ever expected to happen the very moment I started teaching.

For me, it is a great time to look back and recognize the growth over a school year at the speed of learning. It is also a time to reflect on the emotional highs and lows and to unpack the instructional tool kit for some much needed organization and maintenance. However, this June seems a bit different because of the current political climate in Ontario. This has me thinking even more about the importance of some advanced preparations. And why not?

I do this now because the year is still fresh in my mind. Whether I can control it or not, I remain in teacher mode – my internal alarm clock is still waking me up on teacher time. Since it takes time to wind down, I might as well wean myself off bit by bit and I know there must be many others out there as well going through eduwithdrawal. Want proof? Check out #onted on Twitter. There is still so much happening on an hourly basis directly relating to eduction.

Consider this recent tweet from Sam Hammond to our newly appointed MOE Stephen Lecce. It appears that despite going on a nearly 5 month break from the legislature, the new minister was concerned that teachers did not know their schedules. 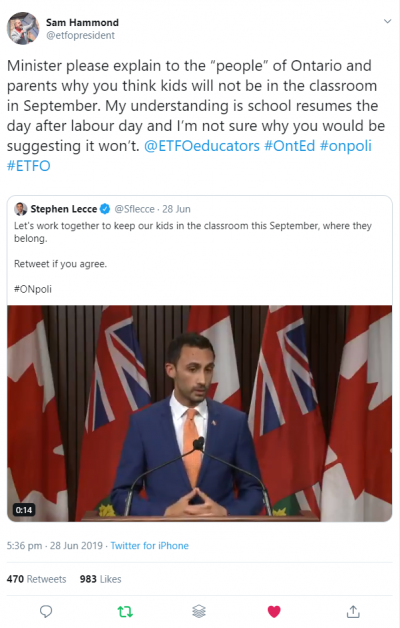 You’ll come to your own correct conclusions about the collection of castigating contrarians currently in public office. I have. With so many educators still in teacher mode, more are becoming actively engaged in challenging the effrontery of messages like Lecce’s. This is in order to protect all students from the political dynamite intended to undermine the bedrock upon which our stable and progressive society was built. It may be Summer, but time out of the classroom can be well spent in dispelling false claims and  controversial assertions coming from the ruling party.

One of the biggest loads of misinformation in need of incineration has been the outright promise that no teacher jobs will be lost. This has been a massive cause of concern as class sizes have been co-opted. It has also come with the staggering and sad losses of positions for many amazing educators. Many who continued to go beyond the job in order to serve their students all the while holding the cards of an uncertain future.

Someone who is going beyond to inform us all is Andrew Campbell. He curates a comprehensive document that shows how the cuts to education are affecting our profession by the numbers and from board to board. Warning, this might provide many with night terrors if they read it before bedtime.

This is what keeps teachers awake at night. We have to deal with stunted salvos like the one above from Mr Lecce and disrupt its corrupted political narrative. We must take a stance for the students whose voices and opportunities are being stripped down to the basics in act that will only destabilize their future by limiting their access to education. This is beyond anyone’s mandate or scope of power. No decent citizen voted in the hope of shortchanging the future of our youth.

In order to get past it, we must go beyond signing petitions or retweeting.

So stay up late.
Write a letter to your MPP.
Support and encourage one another.
Read up on the issues via @ETFOeducators on Twitter or via the Building Better Schools website.

We must go beyond the government insults, the inexplicably random policy choices, the gutting budget cuts, the acrimony, the villification, the distrust, the disingenuous praise, and the indifference because the 2 million students who we are fighting for are worth it.

There is something each of us can do to make sure our collective voices are heard. Sharing yours in July and August while you rest, recharge, and prepare for September will ensure that our support of students will be heard loud and clear all Summer too.

When the bells ring again in September, our answer to the ruling party will be in the form of 83 000 + strong devoted educators each ready to teach far beyond the destructive discourse of a politician’s disputes, and instead straight to the hearts and minds of our students like we always do.

Best to you all this Summer. Thank you for a great year of interaction and inspiration. See you on Twitter.