I was asked to present a workshop about using technology in the Primary grades over a year ago and got into a debate with the Principal at the host school about apps.  The Principal was quite excited about the apps that he intended to purchase for his teachers to use with their students and he showed me his list.  I was surprised.  None of the apps were creation apps.  They were all “practice basic skills and keep kids quiet apps”. I showed him my list of preferred apps.  It was his turn to be surprised.

“These apps that you have chosen for the teachers are a lot like fancy worksheets for kids to practice basic skills.  Those skills are important, but doing a worksheet on an iPad might be a little more engaging, but it is still a worksheet, and an expensive one at that!  The apps that I am going to share with the staff today are all apps that students can choose from to show their thinking in a fun, engaging way that also provides opportunity for feedback and editing.” Unfortunately, he didn’t stay for the workshop.

The main difficulty that I have found with apps is finding something that you can use in schools that doesn’t cost a lot of money and isn’t just a free trial or have “in-app purchases”.  I don’t mind paying a few dollars for an app but when you get into the double digits for a school, it isn’t sustainable.  I thought I would share a few free creation apps that I have used with both the primary and junior grades.  I have also included some samples.  None of the samples are done by students, but I can assure you that each of these are quite intuitive and easy even for primary grades to use.  Each of the apps has a link to it in the App Store for further information.

Shadow Puppet EDU  The name is deceiving and the little white bunny on the app icon is too.  It basically provides a video of a slide show in which you can add voice and text.  Students can link to the already sourced for copyright pictures provided within the app or take pictures from their iPad or with the camera.  The students find this one easy to use but tricky to edit some of the text.  It uploads to Seesaw and other platforms easily.

Here is a sample of Puppet EDU:

Padlet  I have used this a lot in order to begin a new unit of inquiry on something.  It provides a place to put safe links and videos that I have sourced for the students as a starting point and reference.  In addition, the students can collaborate their thinking with sticky notes. You can share it publicly with other Padlet users, but we keep ours private at this point.  We may share our Padlets with other classes at our school through the use of the QR code and password.  The sign is uses a QR code which you can print out. We are using Padlet for our unit on the Olympics.  The students will then create their own Padlet to share with classmates on an Olympic event that they will research.  Students will be invited to provide feedback to one another.  This is a screen capture of our Olympic Padlet: 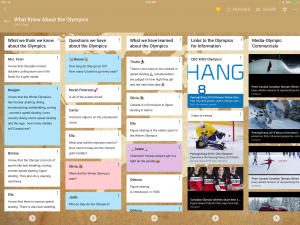 iBrainstorm  This app allows students to add sticky notes, text or hand written notes to templates like Venn Diagrams.  In addition, up to 3 other people can be invited to collaborate on the same template in real time. You can take a screen shot and save it to photos.  It also uploads to multiple platforms easily. 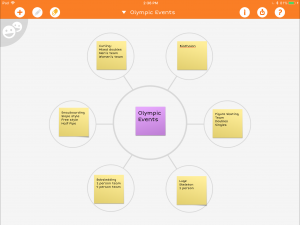 I am a teacher with the Kawartha Pine Ridge District School Board and I have been teaching for over 20 years. I am an Instructional Leadership Consultant with the portfolios of Innovations and NTIP. I have the privilege of working with new teachers and their mentors as well as helping teachers develop 21st Century learning competencies with their students. When I grow up I want to be Ms. Frizzle from the Magic School Bus.
← Previous Post
Next Post →