In a year unlike any other, I found myself so unsure as to what to expect as we worked to build our classroom community. Early on in the year we read the book, The Day You Begin and had several conversations about the things that make us each unique. This also started our conversations around the type of space we want to create – one in which everyone is honoured for who they are. Of course the word “bullying” came up in our conversations. The TDSB defines bullying as “aggressive behaviour that is typically repeated over time. It is meant to cause harm, fear or distress or create a negative environment at school for another person. Bullying can take on a number of different forms: physical, verbal, social or electronic, often called cyber-bullying.”1 With this understanding we realized that there are also many reasons why someone might be bullied. This was a great segue into our Data Management unit.

Students were tasked with finding data on different forms of bullying. With so much data on the internet, students found graphs and statistics that were all quite shocking. Many resolved to think about ways in which we could prevent forms of bullying from happening. To me, this analysis spoke directly to a specific expectation in the Data strand of the Math curriculum: D1.6 analyse different sets of data presented in various ways, including in stacked-bar graphs and in misleading graphs, by asking and answering questions about the data, challenging preconceived notions, and drawing conclusions, then make convincing arguments and informed decisions. Based on data, we were going to see how best we could make better decisions about our interactions with one-another.

One of the pieces of Data that we looked at was from a Brief Examination of Bullying Statistics in Canada from the Evangelical Fellowship of Canada from 2013. Now I don’t know much about the organization but it was definitely exciting to find statistics related to Canada when so often, the statistics  are American. Contained within the report, we found a variety of graphs that we could use to interpret. One of the graphs that we looked at was the one below. 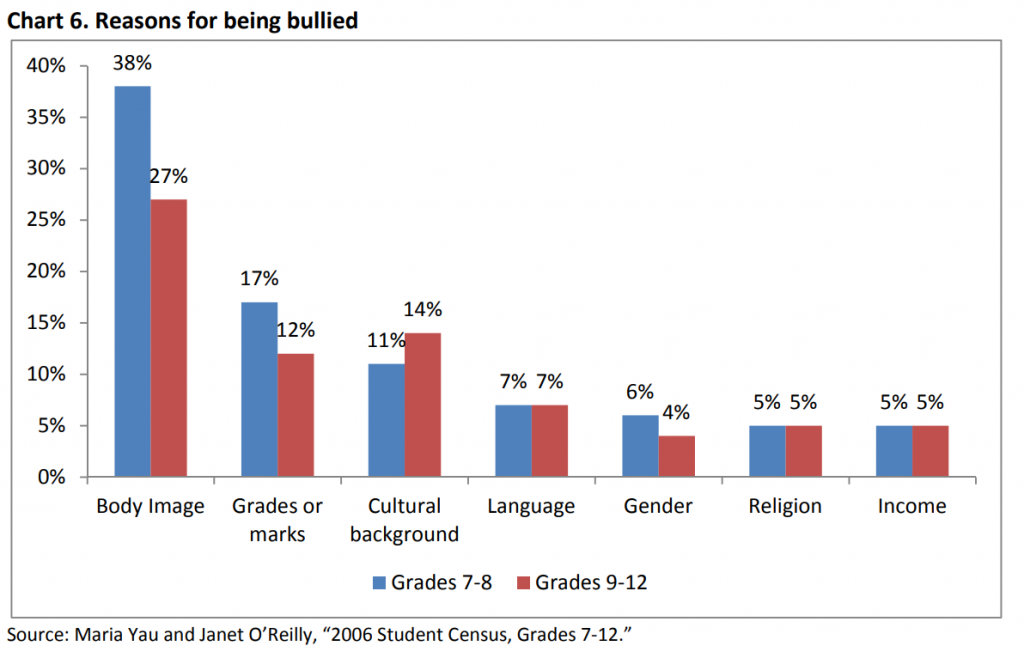 Students were surprised at first but when they actually sat for a moment and thought about the information presented, they agreed that the data makes sense and wondered what has changed in the last 14 years. For us, we started having conversations around times when we may have been made to feel uncomfortable about any of these factors or were indeed bullied, and the impact. Many students agreed that being treated unfairly or bullied based on these factors was something that shouldn’t happen in classrooms or schools. Now was the time for us to act!

Like every year, I try to create a space where everyone feels valued for who they are; one in which the statistics we had been discussing didn’t occur. I think all students also want this type of environment in which to learn. With this in mind, we created our Classroom Action Plan. With steps on how we would interact with one another, we created “the rules” around how everyone could expect to be treated in our learning space. Everyone contributed after a brainstorming session. Next, we all signed it and it’s up on our classroom wall. Some of the expectations include:

It’s quite the list and we have had moments where we have needed to go back to it as a reminder of the agreements we made with one another. With the changes after reorganization, we’re growing as a classroom community and I’m so looking forward to continuing to learn and grow together as a class this year.

I'm an educator who loves integrating technology and mindfulness in the classroom. Through inquiry and design, I work with students who are engaged in meaningful learning opportunities; developing core competencies, while creating ways to make the world an even better place. View all posts by Arianna Lambert