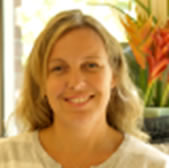 As mentioned in my previous post, I have been working on an Art Studio for the classroom that will provide enough space and materials to meet the interests of all the children in my class. Even though I have set up a physical space called the “Art Studio” there are other centres in the classroom where representational art is also taking place. At the Messaging Centre, many children are graphically representing their ideas with pictorial images, and in the Building Centre children are using the blocks to create designs and structures. We have a table where play dough is often provided, and this too allows the students to represent their ideas in 3-D form.

By integrating art throughout the classroom, I can access many areas of the curriculum in a way that is engaging and accessible for the children. For example, one of the first overall expectations in Science that I like to plan for is “demonstrate an awareness of the natural and human-made environment through hands-on investigations, observation, questioning, and sharing their findings.” Children need support to develop their observation skills and really notice what is around them, rather than assume an image that they picture in their mind. When you ask a child to draw a tree, they often draw the same straight trunk with a round green top on it! By taking students outside to touch the bark, notice the texture and observe the branches, children will develop an awareness and reflect their observations in more accurate representations.

Strengthening visual discrimination in young children can be done at the art centre by providing an object to observe and represent. I often select a natural and aesthetic piece such as the vase of hydrangeas pictured below. A basket of leaves could also be used at this time of year. Then provide a controlled palette of materials. So for the hydrangeas I only set out pencils for drawing and coloured pencils that match the shades of the actual flowers, stems, leaves and vase. The children still have choice, but their selection is from a realistic palette that they will identify as they look at the object with discrimination. 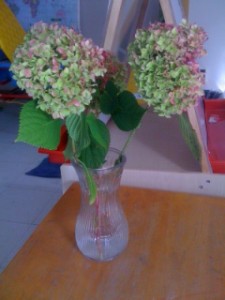 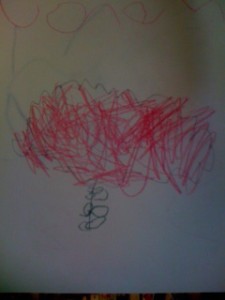 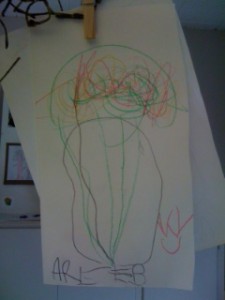 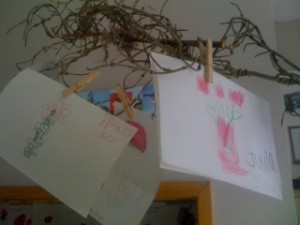 Rather than make art for art’s sake, planned centres can be used to support skill development for visual discrimination, fine motor, and representational as well as integrate many subjects such as Science, Language, and Math.

View all posts by Alison.Board