Science in a Kindergarten classroom looks like many different things. There are learning centres such as the sand or water table, where children are using free exploration and where teachers are guiding specific experiments. There are also inquiry projects that may last a day or a few months that evolve with the children’s interests and are continued with the educators’ guidance. I would like to share an inquiry that has evolved in our classroom this winter.

It all started with a fish. The children found a piece of ice on the pavement in the schoolyard. They noticed right away that it was formed in the shape of a fish. One of the children carried it in his arms as we lined up to go back into the school. My first reaction was to tell them to leave it outside, then I realized this could be the beginning of something bigger – an inquiry on ice and possibly how it melts into water – that the children could observe and discover. 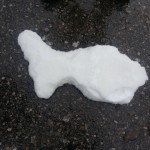 So, the children were thrilled and brought it into the classroom. We put it in the empty water table container. Before we left for home, I asked the children to predict, “What do you think is going to happen to the ice fish?” Here are some of their responses after a brief discussion:

The next morning when I entered the classroom, my teaching partner asked me if I had looked at the ice fish. I hadn’t, and figured I already knew what to expect, a container of water. When I looked, I was surprised to not only find the water from the melted ice fish, but an imprint. This was a surprise for me, something I couldn’t have planned for. We were excited to share the finding with the children when they arrived. 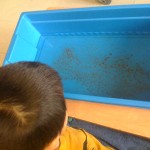 The children were excited to see the shape of the fish made from the sediment in the ice. They instantly realized that it was left from when the ice fish melted. That day, the children observed the dirt and some made drawings. As a group, we discussed the possibilities and the children decided it was the dirt from the snow that had sunk to the bottom of the container. 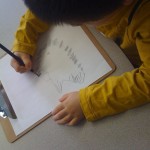 This inquiry led to more experiments with snow. We talked about the difference between liquids and solids. Through our discussions we wanted to make snow melt faster. The children made suggestions on how to make the snow melt faster and we tried them through various experiments. We set some snow under a lamp in our classroom, and it took all day to melt. We also tried adding cold water and hot water (with adult assistance) to the snow. The students discovered the effects of water and compared these to the conditions outside. 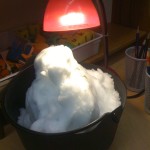 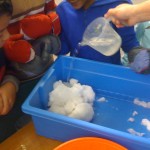 This inquiry has led us to learn more about water…

View all posts by Alison.Board

One thought on “Science in Play-Based Learning”