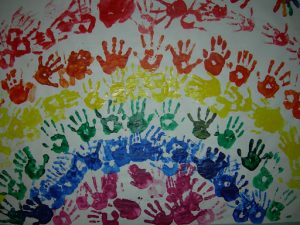 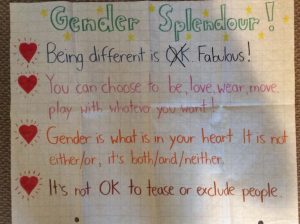 This year, our school community will celebrate Gender Splendour from April 6-9, 2021.  It will be our 11th year implementing arts-based curriculum that explores gender identity and equity, 2SLGBTQ+ communities, inclusive families, and disrupts homophobia and transphobia.

Over the years, the Kindergarten-Grade 6 students have participated in several inclusive and intersectional workshops, including: Love Makes a Family, “The F-Word” (feminism), Kiki Ballroom and the History of Voguing, Toys Will Be Toys, LGBTQ+ Rights Around the World, Pronouns and Possibilities, and more!

When I was in elementary school, my mother came out as a lesbian.  This was in the 1980’s and she told us not to tell anyone because she was afraid of losing her job.  I learned about the painful impact of fear, silence, and homophobia outside of the home.  I also learned about the power and strength of community and love, as we marched in the streets at parades and protests.  My young life as an activist and an ally has developed into a strong, on-going commitment to social justice.  When I became an educator, I was determined to break the silence and celebrate the pride and resistance of 2SLGBTQ+ communities.

All You Need is LOVE….and an ALLY:

When Shannon Greene joined the staff, I found an ally and an accomplice.  We were both creative and committed to transforming our pedagogy.  Together, we brainstormed ideas about how we might support students, families, and staff to explore and express their intersectional identities.  We gathered resources, including picture books and media texts to support these critical conversations.  We reached out to families and community members, and generated guiding questions to investigate.  We wanted to empower students to stand up to injustice and take action.  And we wanted to have fun!!

We celebrate Gender Splendour during the second week of April, which includes the International Day of Pink.  This year, COVID-19 has pushed our celebration a week earlier.  In addition to wearing pink, we encourage everyone to dress-up in different ways.  These Dress-Up Days are always optional.  They are meant to be playful and fun, and create brave spaces for community members to express themselves without fear.  In the past, we have worn: Rainbow Colours, Wings and Capes, Boas and Bowties, Clothing Inside-Out, Spots and Stripes, Glitter and Glam, and Pink!

Every social movement needs a soundtrack.  Throughout the years, we have discovered several songs that make us think, and make us dance.  “True Colours” by Cyndi Lauper, is an anthem that honours how it feels to be seen.  “Same Love” by Macklemore, explores issues of homophobia and same-sex marriage.  “Stereotype” by Samsaya, invites us to stand up to injustice.  Recently, we collaborated with Freedom School Toronto, and learned about how dance can be a form of resistance.  Everyone enjoyed learning about Kiki Ballroom, and the five elements of voguing, before strutting our stuff on the runway.

As we prepare to smash gender stereotypes and critically examine gender binary roles in our society, I am feeling reflective, grateful, and proud.  I am also looking forward to practicing my “death drop!”

Hello! My name is Velvet Lacasse. I live and teach on the land of the Mississaugas of the Anishinaabe, the Haudenosaunee Confederacy and the Wendat. I am a proud social justice educator, and active ETFO workshop presenter and curriculum writer. I love to write and reflect, sing and collaborate.
← Previous Post
Next Post →