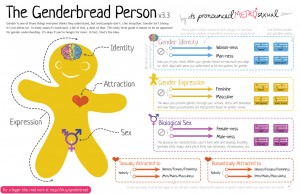 The first day of the course, we discussed the Genderbread Person which really help me understand the diversity in  people, and especially in LGBTQ2S communities. This concept was developed by Sam Killermann. I’ve included several of Sam’s resources below.

Gender Identity deals with how a person thinks about their gender.

Gender Expression deals with how a person presents with regards to gender.

Biological Sex is how male, intersexed, or female a person is born.

All of the above occur on a separate continuum. This means Gender Identity, Gender Expression, Biological Sex, Sexual Orientation, and Romantic Orientation are all on a separate continuum. For example a person could identify as male, express themselves as male, be biologically female, have a preference for males both securely and romantically – or in other words, a girl who looks and presents as a boy but still likes to have sex and love boys (based on a real life case).

Remember about 1 in 10 or 10% of our students likely identify as LGBTQ2S so it’s important to understand about the equity issues around the identities. Knowing about LGBTQ2S is not just about celebrating a day of pink, it’s about embracing the issues everyday!

Check out these resources below

Video: Understanding the complexity of gender

Video: From Boxes to “-Ness” A Journey Exploring Gender

Video: Social Justice is for Everyone