My students and I have really been enjoying exploring how we can use Minecraft: Education Edition to extend our learning. Last month, before we got sent back to the world of online learning, we spent some time diving into a Science task in class.

The basic premise of the task was similar between the two grades: research a topic and build a model of it within Minecraft. Grade 4 students would be choosing one of the animals from Minecraft and creating a viable habitat for that animal in the game, while Grade 5 students would be choosing a human organ system and creating a pathway that would bring visitors through the functions of that organ system. After building their model, they then presented their worlds to the class and talked about the different elements they included.

For Grade 4, they had to consider food chains, predators and prey, appropriate shelter, biomes.

For Grade 5, they had to consider which organs were part of the system, how they’d create them in the game, what their function is and how to show that with a path or railway.

I’ll admit that I wasn’t sure how it would go when we started down this road. I considered that it might be a bit to out there as far as projects go. I should know better by now than to question these kids, though – they dove into this project with excitement and went well beyond my expectations. They enjoyed them so much that today they asked me if they could do another project like this. I’ve never had French Immersion students so willing to do an oral presentation! 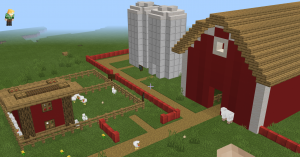 A farm habitat. The students who made this farm talked about the influence of human activity on the animals who live on the farm. There was a food chain demonstration around the side of the barn, with little pens containing different living things set up to walk visitors through the food chain. 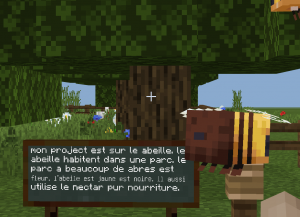 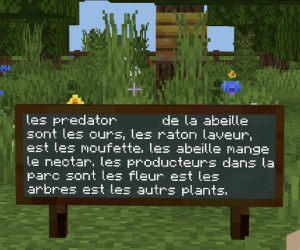 This project was on bees. The students created a park with several wildflower gardens. When you look at the level of French on these signs, consider that I teach middle immersion, meaning this is their first year in French Immersion – and for the student who did this project, it was their first year learning French at all! 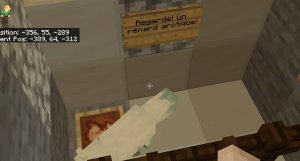 I loved how creative they got with showing what the animals eat. In this project, which was set up to resemble an artificial arctic fox habitat in a zoo, a student put an item frame on the ground and put raw chicken into the frame, making it look as though this arctic fox had been fed by caretakers. 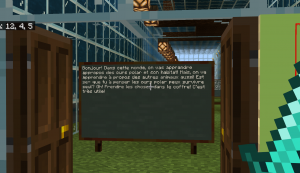 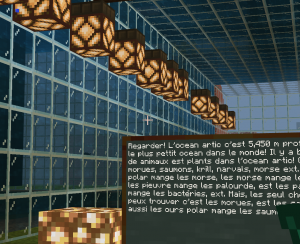 This project was extremely cool. The students wanted to show that a polar bear’s habitat includes both land and ocean. They created a glass tunnel that you could walk through, seeing into an ocean full of fish. In the tunnel, there was a point where you could drop into the water and swim out into the ocean, eventually surfacing in a polar biome where you could see polar bears on land.

Sadly, I don’t have many images of the grade five projects, in part because some of them took a long time to complete and we didn’t have a chance to grab screenshots before we all wound up in online learning! I do have this one really great project, though: 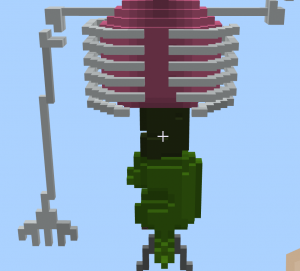 The Digestive System! For this project, you would start in front of a command block that was set to teleport you inside of a mouth full of teeth. Signs on the walls would explain where you were and what part of digestion happens in that area. Then, you’d follow the path down through the esophagus… 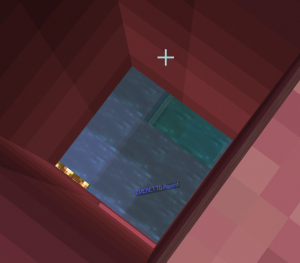 If you looked down through the esophagus, you could see liquid below – the stomach! You could then travel from the stomach through the digestive system until, eventually, you would drop out of the human body and into a (fake) toilet.

Another project took us through the nervous system. You started your journey in a minecart at the nose, where you would pick up a piece of paper meant to be a ‘message’ for the brain to tell it that the model’s nose was itchy. You’d hop in a minecart and travel to the brain, which would exchange your sheet of paper for a new message – instructions for the hand to scratch the model’s nose.

The grade 5 projects were a bit more difficult for them to wrap their heads around, admittedly. Still, they persevered and found some very cool ways to show us how human organ systems work.

Other projects we’ve taken on in Minecraft: Education Edition so far:

Hope you enjoyed this little tour of Minecraft in my classroom. I’m always happy to share more and talk about any of these projects. Now, onto my weekend planning, where I need to figure out how we’re going to use Minecraft: EE in our classroom next week!

Grade 4/5 Middle French Immersion teacher from Ottawa. Passionate about teaching (naturally!), board games, video games, music, and TTRPGs. Former member of the ETFO New Members provincial standing committee. Current member of the OCETFO Collective Bargaining Committee, among approximately one thousand other things that I am always doing. No, I do not actually have spare time, I am just perpetually putting off things that I *should* be doing. @rollforlearning on Twitter. View all posts by Shawna Rothgeb-Bird

One thought on “Grade 4/5 Science in Minecraft: Education Edition”