Teaching the Language of Power

Most of the learning I’ve experienced as an elementary school student is a blur. There are few moments, however, that stand out as pivotal and that have helped shape my experiences as an educator today. One of such moments was grade 7. It was in grade 7 that I learned the word mediocre. Before then, I had never encountered this word and once introduced, it was truly a powerful moment for me. In learning this word I was given language to express an idea that I didn’t even know had existed. This is the power of language and this is why I fell in love with words. My fascination with the ways in which words can be intentionally nuanced to convey ideas with such lyrical intensity fascinates me; not only because of the creative ways in which ideas can be constructed, but also because it is a tool for granting access to discourses that without them one would remain silenced. I experienced the power of language but also that language was power. This experience brought me to my journey of engaging my students in the politics of language and exploring ways I could grant them access to platforms of thinking simply by equipping them with the language of power.

More than mere vocabulary boosters, words of the day or word studies, when introduced in meaningful contexts, can not only enrich student vocabularies, but can also give volume to their voices as thinkers, activists and world changers. My journey toward empowering learners with the language of power began in my first year of teaching. It was a grade two class and I was terrified. I had no idea what to do or how to go about it. It seemed like all the learning from my formal teacher education went out the door as soon as the students walked in. I realized I was in trouble when I would speak to my students only to receive blank stares. What I wrestled with was whether or not to make what I was saying more child-friendly or to simply bring the children up to speed and create many teachable moments with the words that I used. The result was the latter and we began an anchor chart entitled “Ms. Nelson’s Fancy-Schmancy Words” where when students stopped me mid-sentence to seek understanding of a specific word I used and it would be added to the list along with its definition and the sentence in which it was used. Now, 7 years later, the anchor charts have evolved into a word wall in which students are constantly identifying not only new words that I used but also introducing ones of their own and adding words they find in the literature they read or listened to on a daily basis. The love for words became contagious and the thirst for learning new ones was intrinsic.

Students were then invited to use words, or the language of power, as tools in exerting voice to an authentic audience. Students were empowered by words when they interviewed all 5 Mayoral Candidates in the 2015 Mayoral Election. Students wrote speeches and presented them as great orators in front of invited community members that included the local crossing guard, a church pastor and family and friends. Students raised awareness by writing blogs about the impact of their social identities and shared these sentiments with the school community. Their words spoke to issues of social justice and coloured the imagination with distinct imagery, was a power to be wielded in the pens and voices of elementary school students. 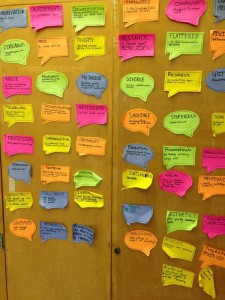 Tisha has taught in five schools in the Greater Toronto Area over the past seven years. She has experience as both an Occasional and Contract teacher teaching in Primary, Junior and Intermediate grades. Tisha is a workshop presenter and blogger for The Heart and Art of Teaching and Learning. She also is an AQ instructor and an author of the book Rights and Equality published by Rubicon Publishing (The Sankofa Series). Tisha’s passion for teaching and learning can be summed up in her six-word philosophy of education, “Love and ingenuity commands sustainable transformation.” View all posts by Tisha Nelson

One thought on “Teaching the Language of Power”