September 30 has been earmarked as the National Day for Truth and Reconciliation. Before this, most educators knew this day as Orange Shirt Day, which stemmed from the story of Phyllis Webstad, a Northern Secwepemc author from the Stswecem’c Xgat’tem First Nation, who shares the story of her experiences in a residential school. The significance of September 30 is profound as it calls for us all as a nation, particularly as educators, to pause and reflect on the effects and impact of residential schools on Indigenous peoples (children and adults) to this day. It is estimated that over 150000 Indigenous children attended residential schools in Ontario alone over the span of 100+ years (Restoule, 2013). We know that many of these children did not make it home, while many others still live with the trauma they faced within these schooling systems.

Orange Shirt Day, now known as the National Day for Truth and Reconciliation, is but a starting point for us as educators. How can we collectively move beyond one day to infuse learning about Indigenous histories and present Indigenous impacts into our overall planning across different subject areas? In the ‘Calls to Action’ reported by the Truth and Reconciliation Commission of Canada (2015), sections 62 and 63 emphasizes the need for an educational approach that centers Indigenous histories, accounts, and perspectives in the curriculum, not as a one-off event or as an interruption to learning, but instead as an integral part of developing understanding within Canadian education.

“In 2015, ETFO endorsed the Truth and Reconciliation Commission’s Calls to Action. ETFO understands that it is integral for educators to move forward into reconciliation with the Indigenous Peoples of Canada” (ETFO, 2022). Challenge yourself to learn more using the curated information provided by ETFO, and be intentional about infusing Indigenous representation in the various subject areas you may teach. Resources can be found and explored at etfofnmi.ca

Fostering further development and understanding (both in learning and teaching practices) of Indigenous accounts and narratives in K-12 learning communities not as an alternate focus or ‘alternative learning’, but as a central tenet of Canadian education is critical to moving towards reconciliation as we learn and teach about Indigenous peoples of Canada.

Over my teaching career I have been fortunate to teach in schools with high populations of Indigenous students and to learn from the knowledge keepers and elders in the communities that our schools served.  Admittedly, I haven’t always said or done the right things but I have learned from those mistakes.  As a non-Indigenous educator, I know that I will continuously be on a professional and personal learning journey.  I acknowledge that it is my responsibility to do this learning.  There are resources that I have used along the way and I hope that by drawing attention to the following resources, I can assist others in their learning journey.

In order to avoid cultural appropriation, to honour and respect Indigenous culture and history as a non-Indigenous teacher, it is important to have the appropriate resources. We can’t avoid teaching about residential schools because we don’t feel comfortable.  It is a part of the Ontario Curriculum.  It isn’t just about “history” either.  Current events draw attention to the pervasive issues faced by Indigenous peoples.  These are teachable moments that are authentic and relevant to students.  Students will be asking questions and forming opinions. As educators we have a responsibility to assist students to find accurate and culturally respectful information.

If you are looking for a place to begin in your learning journey, visit ETFO’s First Nations, Métis and Inuit Education website.  It is filled with cultural protocols, resources and Ministry Documents.  It is a treasure trove of information on treaties, land acknowledgements and avoiding cultural appropriation.  Throughout the literature are hyperlinks for explanations of concepts and lexicon.  Through ShopETFO you can purchase the FNMI Engaging Learners Through Play  resource created for elementary educators which provides play based activities that engage all students.

A quick resource can be found on code.on.ca (The Council of Ontario Drama and Dance Educators). This resource provides a quick chart of protocols on what to do, what to avoid, why to avoid and what to try in order to bring learning about Indigenous culture and history into your classroom.  This document also provides links to videos about Indigenous Arts Protocols, and a quick reference guide for what to think about before engaging with Indigenous Knowledge.

The website helpingourmotherearth.com is filled with tools and resources for educators including videos of Indigenous Knowledge Keepers telling their stories.  There are free educational resource kits with lesson plans for primary, junior and intermediate students.  In addition, you could sign up for professional learning or a workshop on the site.

Like me, you might make mistakes.  However, my Indigenous educator friends have coached me that the worst mistake that non-Indigenous educators can make is to do nothing.  I hope that highlighting these resources will help you along your professional learning journey. 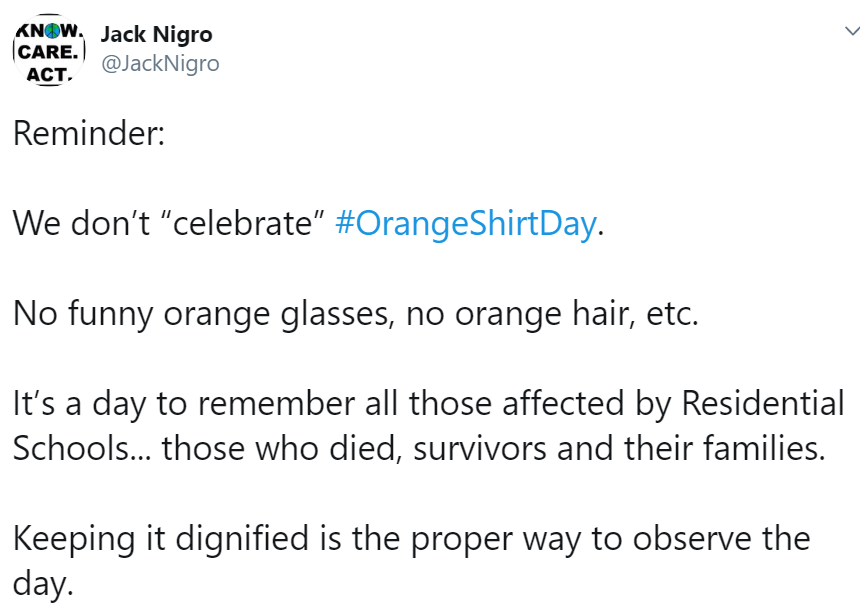 This tweet hit me square in the brain. It was neither confrontational nor rude. It was simply a sublimely and sage sentence that stuck. I said it over and over again while researching, reading, and reflecting while preparing to teach about Residential Schools on September 30th.

“We don’t “celebrate” #OrangeShirtDay.” A simple reminder to all educators and learners.

So before we started our learning today, I told my 2 grade 4/5 English classes that “this was not a celebration.” Today was meant for reflection.

I did compliment them on their numerous orange shirts, and then we were off. The first question was “Why are we wearing these shirts today?” The responses were varied and honest. One student shared how a little girl had her orange shirt taken from her. Another few recalled bits of what they had learned last year, while others seemed like this was all new to them. We went from there?

My next question was, “Have you ever heard of residential schools?” followed by, “What do you know about them?” These two questions led to some solid conversation around the institution of school as we know it compared to the residential schools where First Nations, Metis and Inuit students were forced to attend. I shared about the living conditions, the daily routines, and the terrible food. I added that they could only speak English and would be punished when they didn’t or for a litany of other things for that matter. I wanted to guide students to the understanding that something was wrong with residential schools. They got it.

I could see their eyes and minds opening after explaining how the children were scooped up and taken away for 300 days at a time, far from home, and separated from the only family they knew. Students also learned that the RCMP would arrest families who resisted. And then the question I was hoping for;
“Why were kids taken to residential schools?” Why would they do this?

This became a pivotal point because it led us to a discussion about who “they” were? Putting the brakes on for a moment, I changed they to “colonizers”. The phrase European settlers came up too since we were talking about it. This led to the point where students found out that the government was also part of the “colonizers(they)”, and that their plans included wiping out First Nations, Metis, and Inuit culture through laws and enforcement of racist colonizer policies. The word discrimination came next, followed by a call of racism. 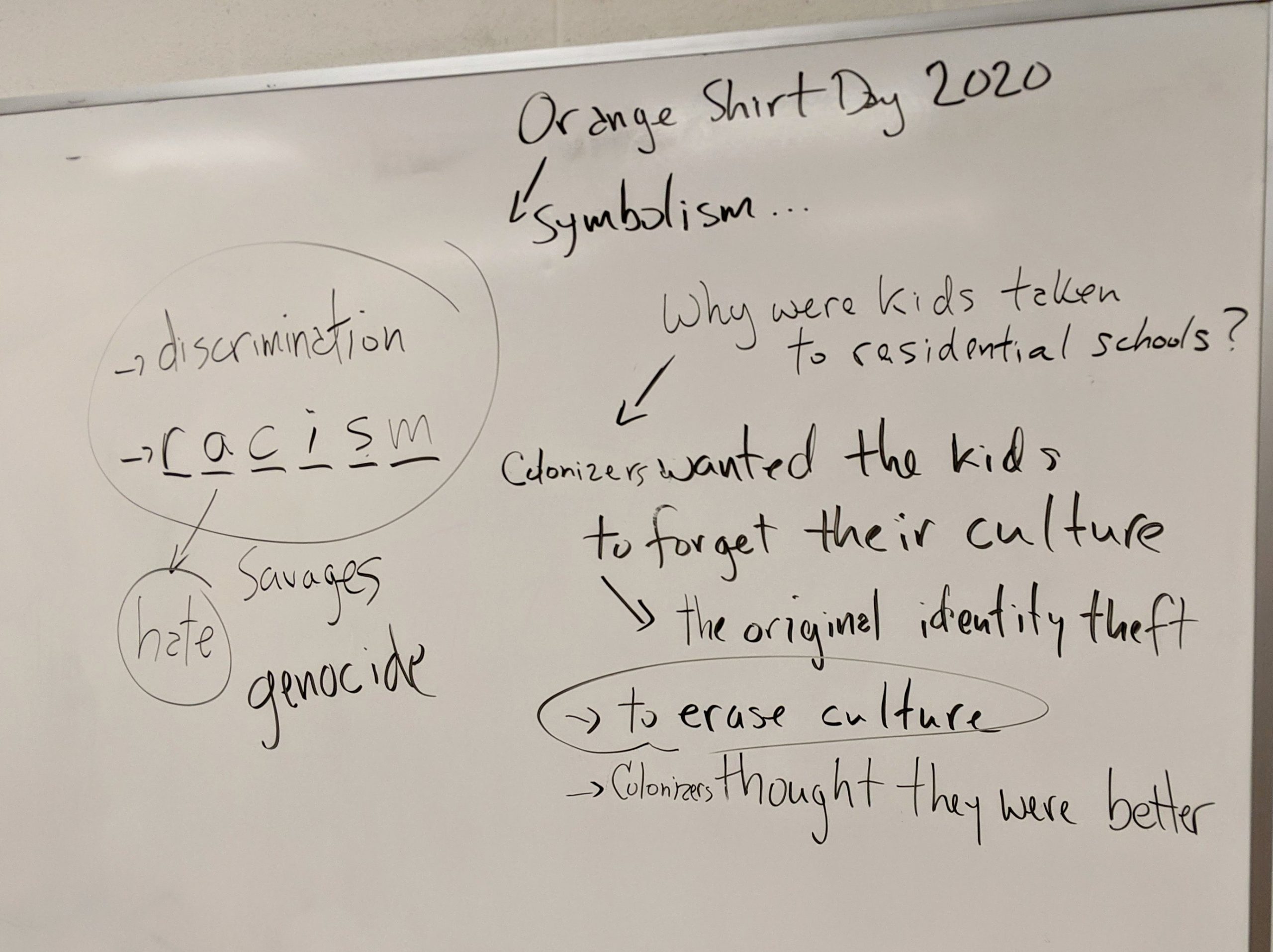 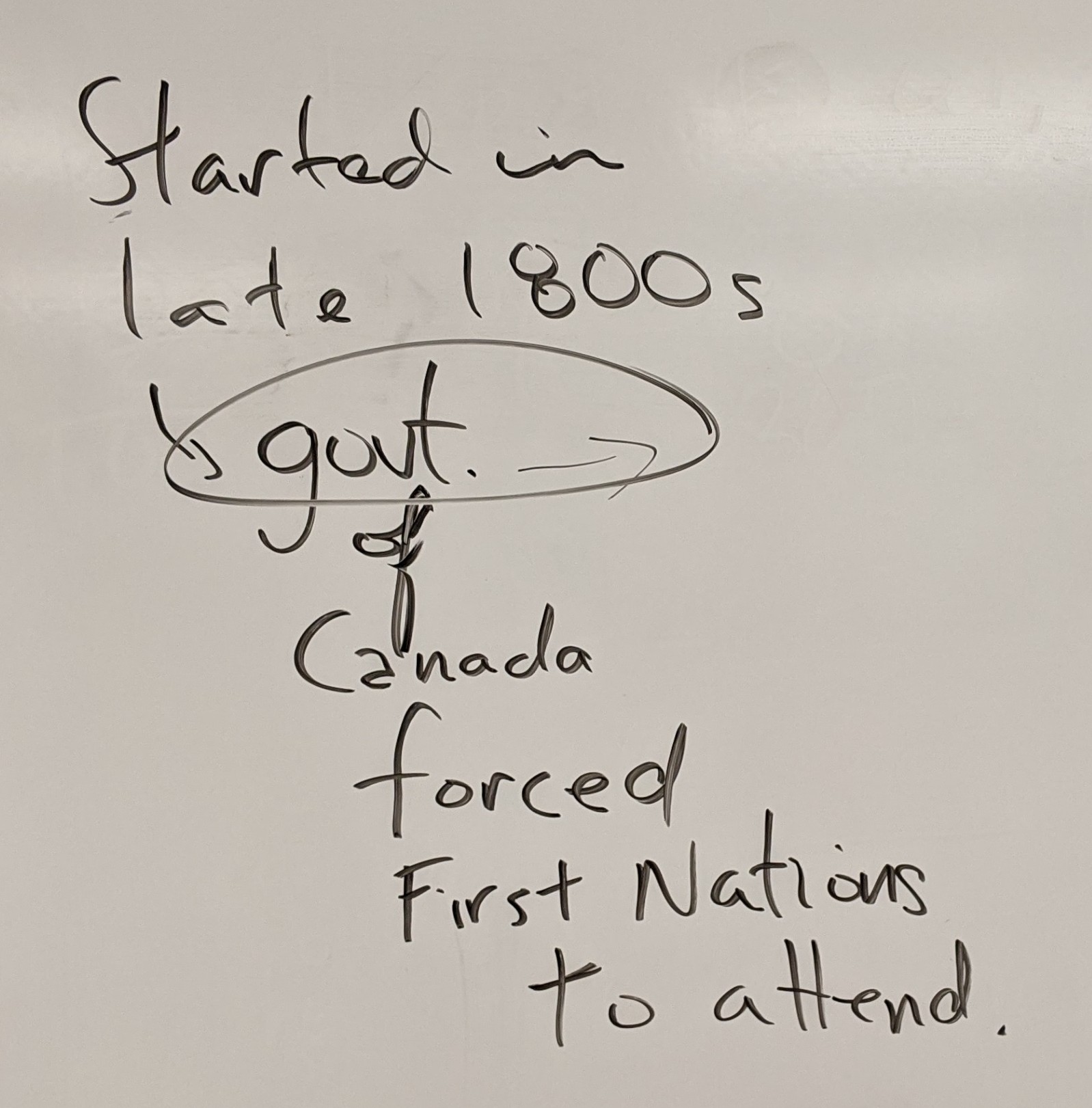 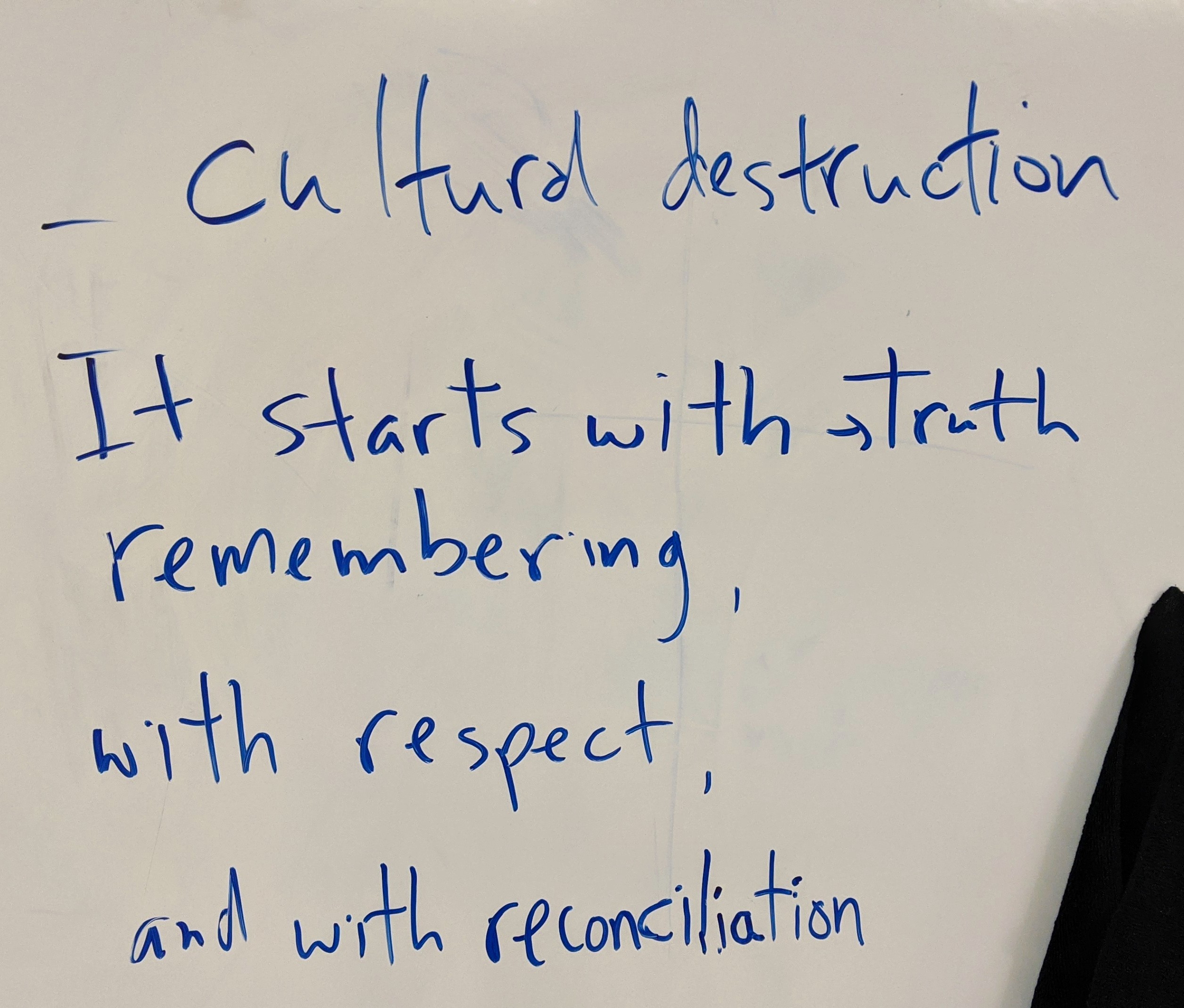 We talked and listened a lot. I shared some connections about how the government tried to label all First Nations as uncivilized savages in order to justify its desire to separate them from their land, their culture, and their dignity.

We talked about the importance of hearing the truth, and that there was more to learn. We promised to continue beyond Orange Shirt Day, and we sat quiet watching this video without sound and then with sound. https://www.nfb.ca/playlists/orange-shirt-day-edu/playback/#2 It was a powerful moment for students to see the images life in a residential school and then to reflect on why we were learning about it.

There were no tacky culturally appropriated mis-interpretations. Orange Shirt Day will not become a seasonal event like Halloween or Valentine’s Day in our schools. We will remember and continue exploring the truth about the legislated genocide attempted by the Canadian government on First Nations, Metis, and Inuit. We will also continue to examine how we continue to benefit from those inhuman actions to this day.

Today was not a day of celebration. September 30th was a day to listen, to become informed, and to reflect on the way that Canada has mistreated the First Nations, Metis and Inuit. We didn’t “celebrate” Orange Shirt Day. We inquired about it. We wrestled with it. We saw residential schools for the terrible places that they were to so many people. We sought to know more of its truth. We wore orange to respectfully remember.