Drop Everything and Learn

This week, I hit the stop button on my life inside of the classroom for another school year. To quote the Grateful Dead. “What a long strange trip it’s been.” Yet, before shutting down, I need to D.E.A.L. more about how to deepen my understanding and leverage my white settler privilege in support of FNMI communities.

Heart wrenching discoveries of unmarked graves at residential schools across Canada have me fighting to make sense of many things right now in this country. How and why could so much hatred and overt evil be inflicted on generations of First Nations, Métis, and Inuit people for more than a century? How can a democratically empowered system built on commandments of love thy neighbour, be so obviously racist and genocidal to the very people who shared this land in the first place? And how did it come with the criminal complicity of faith based institutions to boot? These questions have me hearing some very strong internal voices telling me to stay in teacher/learner mode a little longer.

Maybe it’s time we give Canada Day a timeout for a while so we can move forward in a good way?

Can you recall reading or hearing of any treaties that included one group being subjugated to tyranny and relegated to systemic abuse and racism by the other? I can’t. Everyone in education must take time to ensure that the truth about the traumatic truth of Canada’s past no longer remains on the outside of the history books. It’s can be as simple as shifting from outdated text books and colonizer curricula, by for profit publishers, when we plan our lessons. It can be in seeking your closest FNMI partners in education. Numerous school boards are already doing this and ETFO as well. It’s time to seek out resources that include all sides of the story, and not those that fit the nauseatingly one sided Disney endings written for and by settlers.

In my mind it stands at the heart of our humanity as educators and treaty people. We must do more than acknowledging the trauma caused in the past, but to genuinely reconcile our relationships in order to build a just and inclusive future. There is work to be done and despite my momentary fatigue. This learning is a personal call to action that serves as the energy to keep going instead of heading straight for the chaise lounge on my patio. It needs to start now.

Things I can do (you can too)

I need to turn my attention to learning more about the truth that has been so strategically whitewashed out of our conversations and history books as a nation. A nation that is supposed to be the beacon of kindness and inclusion to the rest of the world. The truth, about Canada that world has been shown by our gleaming generosity and polished politeness, may not be seen the same reality as seen through the eyes and experiences of First Nations, Métis, and Inuit. It’s time to demand better from those in leadership to stop standing in the way of the truth as shared in the TRC Commission Report shared in 2015.

I need to come to terms with the dissonace from what I have been taught about Canada as a student, and ensure that it’s mistreatment of First Nations, Métis, and Inuit does not continue. As such, I am committing more time to listening to voices that have been silenced for far too long, reading books from authors who share stories from first hand experiences or who speak for elders who have been silenced, and by seeking out ways to bring this into my future classrooms.

I need to reflect in order to move forward.

Throughout this year, my grade 4/5 classroom was a space for conversations and lessons on Residential Schools, Orange Shirt Day, the Mik Maw fishery, BLM, Anti-Asian hate, and systemic racism in general. What is abundantly clear despite many meaningful moments of cleared understanding, the fires that have been lit in my students will need to be refuelled. I hope you all take some time to recharge your bodies and minds over the break, but encourage everyone, at some time over the summer, to drop everything and learn in preparation of re-igniting the fires of truth and reconciliation in the minds of students when we gather again to D.E.A.L in September.

Need a place to start?

Important reads to deepen your understanding:

From my blog posts this year, you’ve probably gathered that I believe that in order for change, there needs to be action. By action, I mean steps that are different than what is currently happening. I also believe that these steps should be taken with the community. By listening and understanding how issues are affecting people, we gain deep empathy and can create effective solutions together.

Having taught Grade 5 before, I sometimes find teaching about Government not particularly exciting. This year, however, I was eager to dig into one of the big ideas from the Social Studies curriculum: Citizens and governments need to work together in order to be able to address issues effectively and fairly. With this in mind, the students in our classroom have been hard at work learning about and creating action plans for a range of issues. In this post, I’ll share our journey thus far.

I’ll start by saying that I have been lucky to have many of the students in our classroom for the second year. The work that we did last year around exploring problems within our community certainly gave us a foundation from which to do this work. Last year, we did a couple of design thinking projects and my students are well aware that empathy is at the core of bringing about any sort of tangible change.

In January we read part of an article that shared the top 20 phrases of 2020. From there, we began an exploration of issues impacting people in our community, in Ontario, in Canada, and the world. During our reading, students identified a number of social issues: homelessness, climate change, global warming, racism, Covid-19 (deaths and vaccines), bankruptcies, and access to clean water. Students then picked an issue of interest to them and our research began. Using links online – for example, the Global Goals – students began to understand the problem in a deeper way and also started to learn about what was currently being done in terms of solutions. As they learned, they were asked to make notes, answering the questions below:

For many of the issues, some students identified that lack of awareness was an inhibiting factor when it came to creating change. If people – young people in particular – didn’t know about or weren’t directly affected by the issue, then perhaps that’s why they weren’t taking action to bring about change. We also spoke about change makers and the fact that so many are quite young. With this in mind, the students began discussing ways to raise awareness. In our class, we’ve used Kayak Magazine in the past. I shared that many of the issues include a graphic novel or comic that highlights a particular issue for students in a clear and understandable format. In the past, we read about the Black Railway Porters and about Tom Longboat and it was through these comics that we learned more about the ways in which racism has impacted the lives of Black and Indigenous People. Next, the responsibility was turned over to them to be the authors of a story about their social issue.  After using a simple graphic organizer, they planned their story and used Pixton to bring it to life. 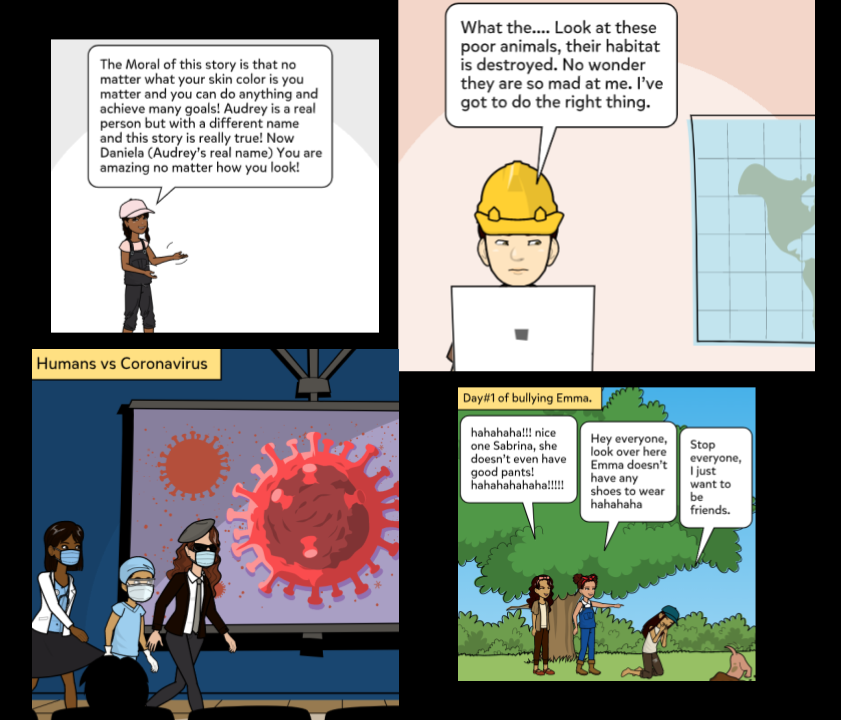 After sharing their comics with one another and getting feedback, our job was to continue to think about change. We read the book, Sometimes People March, and discussed activism and the fact that there are many forms. Thinking back to our big idea, we considered petitioning our government to act. One way of doing this is by writing letters so we started off with a lesson on letter writing, meant to persuade. Students decided if they wanted to write to their local Councillors, MPPs, or MPs about their issue and got to work. In their letters, they were tasked with sharing their recommendations for change.

We recently came together in small groups to create action plans with peers who were working on similar issues. There are so many amazing ideas being thrown around. Through this work, I continue to be amazed by young people and their ability to come up with new and innovative ideas to bring about change. Not only for themselves but for others who may be impacted. This journey has taken us a few months and we’re not quite at our end goal. We’ll keep pushing forward in hopes of making the world a better place.